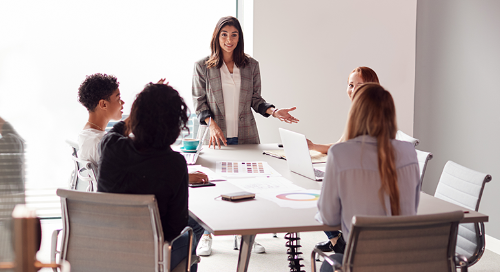 As a middle-aged woman in tech, I am tragically aware of the challenges that women face in the workplace. Early in my career, I recall a female colleague being disciplined for her dress pants being too tight, as it was a distraction to the men. Around the same time, I was passed over for promotion for being too assertive.

A little later in my career, I intervened when a female colleague was being reprimanded for her unprofessional reaction to an executive’s husband making lewd comments to her. A while back, I was asked by a CEO if the woman he was about to interview was dramatic, like the rest of the women in that department. More recently, I have seen women being constantly interrupted in meetings. Personally, I keep apologizing for my success and speaking my mind.

Am I angry? Yeah, sometimes. More often, though, I am thankful.

My examples above are in order of occurrence. You can see that in my 20+ years of experience, there has been a monumental shift in how women are treated in the workplace. At the risk of sounding like a cringeworthy cigarette ad from the sixties – we’ve come a long way and that’s worth celebrating. Many organizations have placed empowering women at the top of their agenda. At present, I am privileged to work in an organization that is named Best Workplaces for Women by Great Place to Work Canada.

What can we learn from the past and from organizations, like Security Compass, that are leading the way on how to empower women?

Support the women around you: This can be as simple as asking a colleague if she has finished sharing her point if you see her being interrupted or reminding your teammate that she doesn’t need to second guess or apologize for her success.

Embrace flexible work arrangements: UN Women’s latest report Turning Promises into Action says that women still do about three times more unpaid care for children and elderly relatives and domestic work than men. Creating liberal work from home and flexible hour policies will empower women to integrate work with life in a way that works for them.

Be transparent and vulnerable: Leaders that share their challenges, frustrations, and struggles with their teams build trust and create a psychologically safe environment for women to be themselves at work.

Encourage women to opt-in to your hiring process: Too many years of young girls being told to be careful on the playground, follow the rules, and not upset anyone has led to women not applying for jobs unless they are 100% qualified. Make an attempt to level the playing field by writing gender-neutral job postings that focus only on the key skills and advertising in women’s groups.

Create space for conversation. Create an employee resource group. Train your leaders on unconscious bias. Bring up the topic of women empowerment; it might take a few tries to get women talking, but I guarantee they have stories like mine and want to be part of the solution.

In the next 20 years of my career, I can see a future where we don’t discuss what women wear to work, get mislabeled as difficult, and second guess ourselves. I can see a future with complete gender equality and parity. I can see a time when my stories sound unbelievable. In the meantime, we will keep doing the work and call ourselves a good old-fashioned work in progress.